How are products displayed at stores which our people cannot reach?

Having worked for 20 years in the industry, sales managers have asked us the same question over and over again: “How are my products displayed at points of sale which my sales representatives are unable to reach?”

We have reasonable grounds to believe that finding an answer to this type of question is worthwhile. The basis for this claim lies in the 95 million specific answers to those questions given by our company.

The weight of having answers to these questions increases every year, for various reasons:

1. Companies are increasingly deciding to reduce the size of their sales departments

Reducing the size of the sales department causes a clear reduction in the number of stores visited, the so-called coverage. It mainly results from the pressure for cost reduction on the part of the chains, and simultaneously from the difficulty in showing the influence of sales representatives on sales at specific POS. Increased costs of employment, clearly visible in Poland in recent years, have only accelerated the process.

2. An ever larger share of the retail market serviced at the HQ level, that is between the KAM - Buyer, Producer’s HQ - Retailer’s HQ.

This is an especially important matter when it comes to clients, whose sales reps only have very limited influence on a specific order, while the exposition of products at point-of-sale level is carried out strictly according to the guidelines set out by the chain’s headquarters. The role of sales reps at such points would basically boil down to that of a high-priced auditor. This is usually put down as a redundant investment because, in fact, we do not know “how the exposition looks at points of sale which our sales reps cannot reach”, but it surely can’t be that bad because I have settled everything and paid everything up at the chain’s HQ level. We will come back to that later in the article.

This trend constitutes a challenge not only for the chain itself, but also for the producers’ sales departments.

It is difficult for chains as the level of discipline varies depending on the store, while the expanding scale of operations increases the difficulty level as far as execution is concerned. People responsible for maintaining contact between the HQ and the store are often referred to as “Advisors”, who oftentimes play more than one role at the same time. They are supposed to make sure that the exposition standards of the franchiser are met, and simultaneously they are to convince the franchisee to purchase an additional batch of products to form part of a special offer. The combined role in which the advisor is supposed to set targets and sell is extremely difficult to maintain. This boils down to a situation where in most cases the second part of the advisor’s duties takes over. It is more measurable and translates directly into the results of the franchise’s chain, ‘right here, right now’. Unfortunately, in the long run it generates more and more problems.

As far as the sales force is concerned, it is difficult for producers to rise to the challenge, as in most cases they lack the necessary structure. At this point, they must comply with the trends described in sections 1 and 2 above. Paying visits to an extra thousand stores is a great challenge for them, and as a result, many a producer decides on a hybrid solution. They only visit a specific number of points of a particular franchise chain, assuming that such a sample will reflect the overall picture. Unfortunately, from experience we can say that in most cases the truth of the matter is different.

Our clients are impacted by similar trends. And that is only a part of the challenges that lie ahead.

What is it really like at points of sale which we don’t manage to get to?

We carried out a really interesting study for one of our clients. We visited one of the chains, managed by HQ, that is to say through arrangements made between the KAM and the head office. Thanks to the decisions made at management level, the client reduced the sales structures dedicated to that chain. The client assumed, as did HQ, that the chain was disciplined to such an extent that ceasing producer inspections would not significantly diminish the enforcement of the promotional expositions.

After some time, the client decided to check the actual quality of the execution of the store exposition arrangements, and so the chain stores were visited by our partners’ auditors, equipped with the PRO.Display application, which is based on an automated exposition photo verification tool using Artificial Intelligence. It is of key importance because:

“Photos and Artificial Intelligence do not lie”; what’s more, one can always go back and study them again. Thanks to this, during the summary of the visit we didn’t get stuck discussing “whether it truly looked like that”. Did the auditors get the targets right, did they understand the set KPIs, which are often really complicated? Let me refer back to an earlier entry: “What does it mean – the store is running a promotion?” – In that post I wrote about how complicated KPIs controlled by our clients can turn out to be.

This allows one to specify the KPIs and to determine potential exceptions. Sending feedback and reports to the client immediately, any discrepancies in the initial arrangements are identified even the same day.

In addition, in this type of project, corrections based on the auditor’s work must be implemented immediately. This is made possible with the use of PRO.Display.

The scope of the study can be changed right after the inspection performed by the auditors. This enables us to perform stricter or lighter verifications of whether KPIs are followed, which came in particularly useful in the case being described.

The results of our first measurements are visible in the slide attached. They might seem quite shocking, so we decided to go through them step by step.

When it came to analyzing the results, we quickly came to the conclusion that we should loosen up on some of the criteria, using the PRO.Display system of course.

For example, when verifying the promotional exposition arrangement, we considered every kind of store exposition under contract, at two KPI levels:

Based on those two depictions, one might observe if contractual obligations are being carried out by the stores of a given chain. The best promotional execution was achieved by our client who clinched a deal for a temporary promotional store exposition. Employees of that chain are used to having a clearly designated spot for the exposition, so they try to keep it that way. In that specific case, the promotional expositions were executed at 36% at that chain, assuming that the presence of at least one SKU item under contract per special offer counts as a criterion for success. If we were to require more products, say a dozen (the definition of “full availability” fluctuated and was dependent on SKU), then the target was reached at a level of 33%.

It came off worse in case of the permanent exposition, the one which was supposed to be visible at stores throughout the year. It is common knowledge that “stores are not made of rubber”, so oftentimes such a display was replaced by a display with a special offer. At full availability, that parameter was achieved at a level of 8%, but should a lighter KPI be adopted, with a minimum of 1 item on exposition, it amounted to 11%.

Exposition stands which were supposed to coexist with additional campaigns conducted in a catalog came off worst. The chain guaranteed an additional exposition to producers who invested in the presence of their products in such publications. In that case, the execution of the arrangements fluctuated between 1% to 3%.

We are convinced that you can draw most of the conclusions by yourself. On the basis of many different control projects, we would like to add the following comment:

The belief that “I have made the necessary arrangements and made the necessary payments, so even if my sales representatives are not there, it is still going to be good, or at least not so bad”, will not help to build up your exposition. From experience, we would like to encourage everybody to remember, when setting targets, that it could be much worse, or even a great deal worse. Projects carried out for the chains often show that the road to perfection is still very long as far as execution is concerned. This is especially visible in pilot studies, where the structures are not adjusted to such exposition standards. 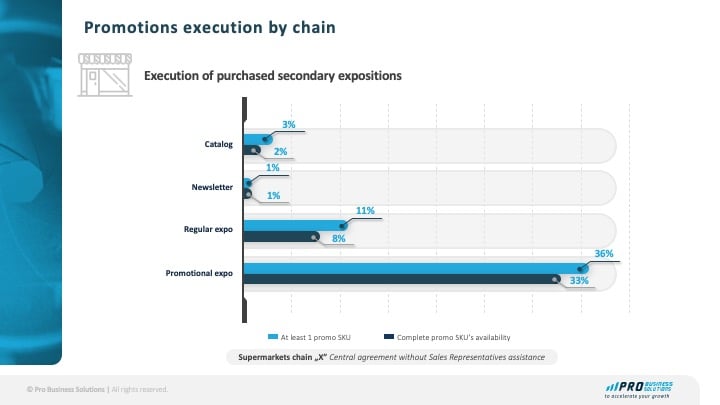 In this article, we are definitely not encouraging companies to maintain expensive sales structures for those visiting the stores, especially in places where the sales representative does not make an impact on the level of orders/sales. We do, however, encourage them to maintain a credible and objective system of executing store exposition standards. The principle “believe and inspect”, as showcased by the results of millions of inspected expositions, as well as by the introduction of control systems translating into significant improvement, pays off. I urge everybody to seek answers to the question of “what is it really like at places where our people don’t get to?”. By the end of 2020, we had given over 95 million answers to this question to our clients. 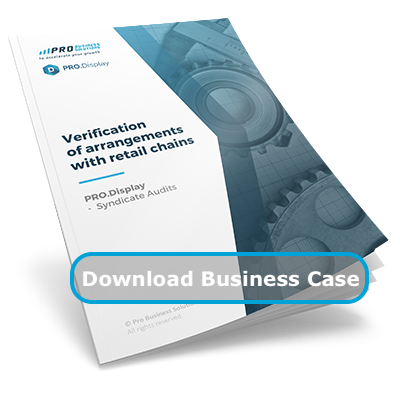